Where to Take a Shower While Traveling: Love's Travel Stop 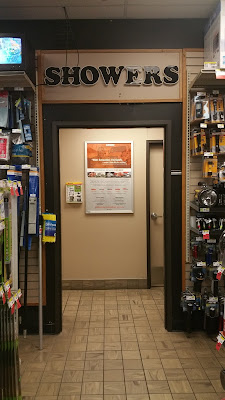 While traveling recently, I came across a slight problem. A cold, dark shower. No electricity. No hot water. Blegh! Too scared of the abyss, I panicked and called Love’s Travel Stop. For those unfamiliar with this, it’s a truck stop. Are you crazy?! Why yes.. yes I am.


“Isn’t it dangerous!?” “Don’t get stabbed!” “Please don’t die.”
No, I didn’t plan on dying at three o’ clock in the afternoon and I definitely did not plan on going in to an environment where I thought I was going to be stabbed. I’ve been around enough to know that if something is going to happen, it will. No matter how much forethought and planning you put in to something. This, is a wonderful example of how fear consumes us from the unknown. A reason why so many people don’t fully indulge in what life has to offer.
Well let me tell you, that was the best damn shower I’ve probably had in a long time. Just mildly scalding with enough pressure to take the paint off of your car and I LOVED every single drop!
Let’s have a recap.
I called first to see if they even offered public showers.
Love’s Travel Stop Rate: $11.00/person.
What’s included: Matching blue towel, facecloth and liquid body soap located on the wall in the shower. For my experience, there was an outlet to plug in a hair dryer, or in my case, my phone charger (because I like to live life on the edge of 2%). A toilet, to contemplate more of life’s decisions or read your Facebook on, is located next to the shower. So, if you’ve had Taco Hell, you’re in luck! There was a fan hanging on the wall, but it didn’t have any awesome features to share.
What to bring: Your nasty bits, your own towel, clothes, beer, shampoo/conditioner, soap (if you’re sensitive to lab made chemicals), toothbrush/paste, and FLIP-FLOPS. *I highly recommend flip-flops in any public shower. There’s too much bacteria on the ground that could ruin your dating life or your day, if you’ve got the foot fungi. Protect yourself and just wear them in the shower, plus they dry quickly. I was just kidding about the beer, unless you’re in to that kind of thing.
The experience: I’m not going to lie, I had no idea what I was about to encounter, so I stayed in my car for a minute and thought to myself, “Do it for the blog! No, it’s for me…I stink! But blog!” I grabbed my bag of clothes and flip-flops (noted above!).
I wandered like a goldfish to the counter and shyly asked, “Where do I go for showers?” The clerk pointed with her finger as if Dumbledore (Harry Pothead I mean Potter reference) was showing the way as I continued swimming through the sheeple to the second counter. “I’d like to pay for a shower,” I said. A complete stranger standing next to me dealt his loyalty card and replied “Here, this should cover it.” Never in my life would I have imagined some completely random dude would offer to cover an $11.00 shower at a truck stop, but he did. Thank you truck stop man!
You’re given a ticket with a number, almost like waiting in the Publix deli line, but not as appetizing. I found a seat in Subway and caught up on Judge Judy. I’m fairly certain she’s a vampire because she doesn’t look like she’s aged at all. She still looks the same after all these years!
After my number was called, I was handed a blue towel that looked like it had been stolen from a Dr. Seuss book, and a long wooden sized ruler with a key. Note to self, to open the door, you must turn the lock all the way and THEN turn the handle and THEN walk through. Otherwise, you end up awkwardly close against the door.
For extra protection, I placed my trusty running shoe in the corner of the door and the wall and my small pocket key-knife on top of the soap dispenser. Who needs a gun, when you have the hands of Jet Lee?! Scrub-a-dub-dub, I was finished in the time it took to read One Fish, Two Fish.
Feeling refreshed and ready to take on the world, my first quest was to check out at the counter and let the lady know Thing One’s towel was left it in the bathroom. The second was to buy myself a chocolate bar and slave for 12 hours.


Suggestions: Definitely bring your own towel. Wear flip-flops. Go during the day if you can help it. Arrive early. It could very well take 20 minutes before your number is called.

Kate, from http://www.adventurouskate.com/ recommends traveling with a big rubber door stop. For those that are unsure about the idea of using a public shower, it's one extra barrier to keep the peepers out. 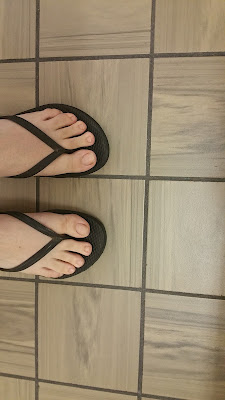 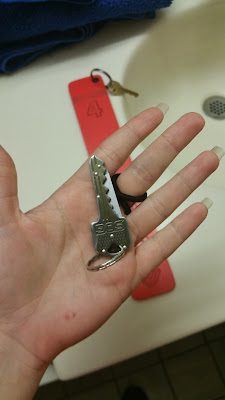 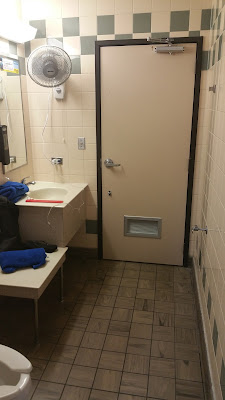 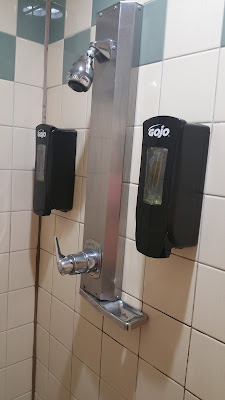 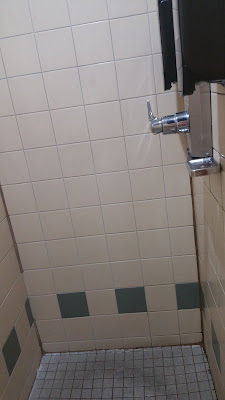 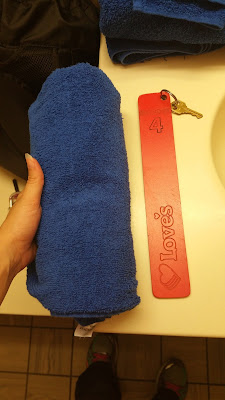 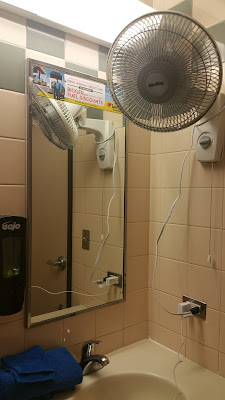 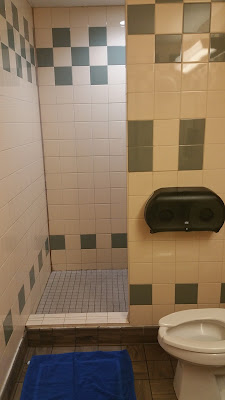 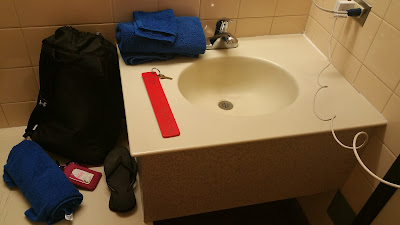 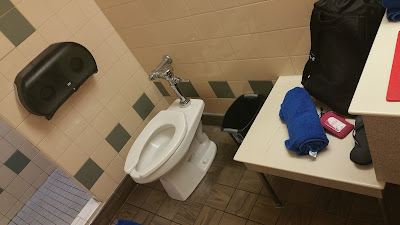 If you enjoyed my article, please leave a comment below or share it with your friends. Thanks!

Email ThisBlogThis!Share to TwitterShare to FacebookShare to Pinterest
Labels: ALL, Reviews, Travel