The short: “Fish are friends, not food.” – Finding Nemo 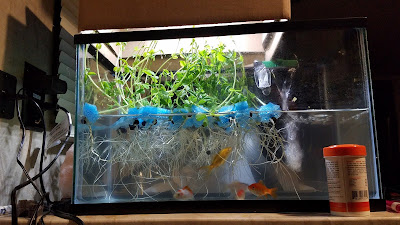 
I suck at making awesome elaborate posts, so here it goes.


Usually, you want to start your tank running a full 24 hours before adding fish. This allows healthy bacteria and harmful chemicals to even out before throwing fish in to their new environment. I already started growing peas in a tray outside when I decided to take on this project. With this in mind, I grabbed a pool noodle to help the plants float in the tank. Impatient, I may have just thrown them and my new fish together right away (although you absolutely must let the fish get acclimated to the water temperature and chemicals first before just dumping them straight in).  – If you’ve never seen fish get shocked before, YouTube it.


Before purchasing a pool noodle from Walmart, I found black foam on the ground after the hurricane to experiment with. I really try to upcycle as best I can, but again, I’m not perfect at that either. Hence why my slogan is “Heather tries at life.”


After the filter ran for a couple hours, the fish were ready to go!


Day 1 – The plants started looking a little sad at the end of the day. It is possible that they weren’t receiving enough nutrients. One theory, is that I completely stripped those nutrients after removing soil and dumped the plants in the aquarium filled with pool noodles and fish.


Day 2 – With help of the LED lighting and constant water circulation, it appears oxygen was capable of getting to the roots, giving them a boost. I nearly killed half of the sprouts plucked on the day of putting this aquaponic system together because I let the sprouts dry out a little too much. The biggest advice I can say while setting your system up is to NEVER let the roots dry out. You’ll be looking at a dead limp plant.


Day 3 – I can’t have nice things. My plants looked healthy and seemed to be bushy with a lush green. That was, until I dropped the lid on them. All became crooked and the original black foam I was using for some of the sprouts became too water logged. However, I saved them off to the side for a smaller starter system. Yay recycling.


Day 4 – Plants look like they’re still lacking nutrients. Fish were fed a little extra. I did not know goldfish will continue to consume and forget they have consumed. I almost learned the hard way, goldfish will eat until they die.


By the way, I chose goldfish because they were $80.00 cheaper than five Koi. Koi are VERY expensive. Also, shiners for bait fish, require a little more effort than I was willing to give. Just something to think about when you’re trying to save the Earth on a budget.


Day 7? – I kind of lost track already. There’s a lot of energy put in to rotating around the sun. I’m just saying.


Day 8 – I’ll continue here. I think. My pea plants look like they’re very skinny instead of bushy. I compared them to the plants growing outside, but maybe it’s because with my aquaponic system, they might be able to grow taller.


I don’t know why I never attempted this sooner. Fish are so relaxing to look at. Especially when your world is consumed with stress, like fighting people at Wal-Mart and pissing off the turtle haters while saving creatures from humanity.

Below are some pictures, not in any order of what the progress has been. Still messing with the format. What bloggers don't say, is how long it takes to actually format and post their material. One man band over here! Anyways, enjoy!

Update 11-19-2017*
I'm sad to report, my aquaponic system did not make it. While it was a fun attempt there were multiple reasons my plants withered away. I'm pretty sure my experiment lasted a grand total of 20 days.

Let's cut straight to the point.
Lighting - I left my light on for more than 12 hours a day. Some leaves would turn to a crisp after being dried out for so long. The light was small so only a small concentrated area would receive enough UVs. To combat all of this, I would recommend obtaining a timer for scheduled lighting.
Nutrients - I chose goldfish because they were supposed to be a very messy fish. Well, messy in fact they are. They would even eat their on faeces. The tank would essentially be spotless from the amount they consumed, leading to my next problem.
The Fish - They literally eat anything and everything! I believe because they wouldn't stop, they murdered the plants even quicker because their root system was getting destroyed.

Needless to say, it was an interesting experience.

UPDATE 08-01-2018*
Maybe I should just stick to growing plants in water before adding turtle bait. Unfortunately, the last sacrifice was given a viking ceremony to the sea. I'm not very good at this and wonder how many other people have lost a couple fins along the way.